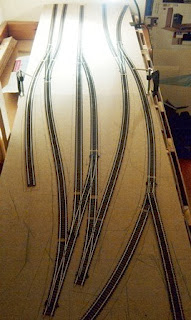 This weeks blog focuses on the track layout and setting down the track bed. I decided as there are five different levels of track work on the layout to have an open top style of baseboards where only the track bed is fixed in place with the rest of the baseboard open. 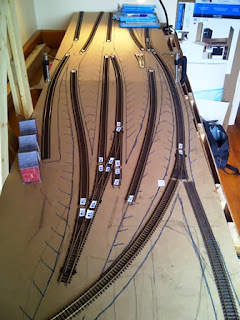 All told, the layout has about five different levels. As the layout is a shunting or switching layout, I wanted it to be as interesting as possible with various grades, kickback sidings, buildings obscuring views and lots of line side industry. 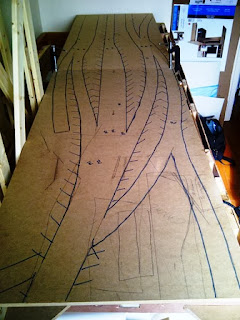 I cut all the track to fit the plan I had drawn so the track was prefabricated in a way. I numbered all the points or switches so I would remember which one was which when I came to finally glue them down in place. I now lifted all the track which left me with the track plan on the two MDF boards.

The next bit was not pleasant as I did not have an electric jigsaw so I cut out all the track work using a small fret saw which is something I will not be doing again. Once the track base had been cut out of the MDF board it was time to lay it on the baseboard and mark where it sits so I can then start working out where the gradient risers go to support the track base. 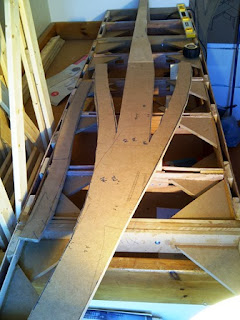 The main line comes in from the left, runs into a round loop and leaves to the right of the layout, all of which will be on the level. This was my starting point. I worked out my lowest point of track work at the front left and worked back from there till I had worked out how high the level section of the main line would have to be. I started putting the risers in from the far right of the layout and worked my way across to the left side as you can see in the images.

I tried to make the gradient as gentle as possible but ran into one problem with the front gradient later on and had to rip it up and start again. As most of the locomotives running on the layout would be o-6-o shunters pulling very light loads then I could get away with steeper than normal grades.  As you can see in the diagram, which is not to scale, the various levels I have created .

The idea is that the navy base is built into the side of a hill on the West coast of Scotland next to a deep sea loch where flat ground is hard to come by. My inspiration came from of all places Thomas the Tank Engines and more so from their dockyard scene because it reminds me so much of the Royal Dockyard where I worked. 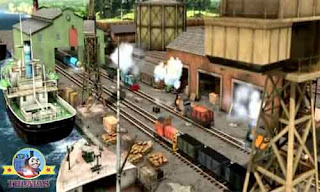 Here are some other images from the internet that have given me ideas and inspiration. 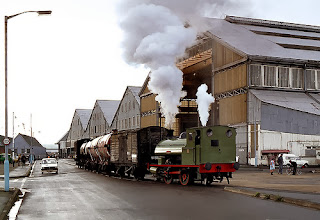 I wanted large naval warehouses, track set into the roads, small locos shunting a few wagons from works to works. Lots of small detailed scenes and tons of atmosphere. 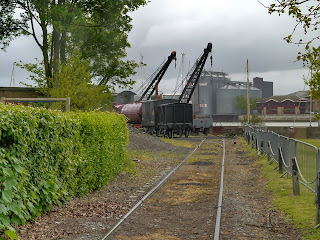 The layouts period is middle sixties to early seventies with an overlap of steam and diesel with the railway nearing the end of its useful life with lots of worn out rolling stock and unkempt track work similar to the image above. 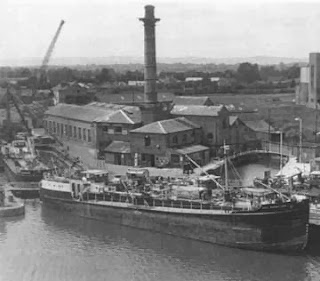 The idea is that the navy base is built into the side of a hill on the West coast of Scotland next to a deep sea loch where flat ground is hard to come by.

Anyway, that gives you an idea as to my plan for the layout so next week I will explain the construction of the base board risers that support the track base.

Those who can laugh without cause have either found the true meaning of happiness or have gone stark raving mad.