HM Dockyard
And so it begins.

There was one layout that inspired me to finally after 30 years of looking at model railway layouts start to build my own.

This small wonderful layout above all inspired me to start the planning, scribbling on bits of paper my ideas as they came to me during the day. I wanted a small shunting layout that had lots of potential. I also wanted it on various levels and constricted by the difficult terrain and hemmed in by various styles of engineering buildings. It also has to have a through running line that will be added later, but in the meantime it was to be strictly for shunting wagons. 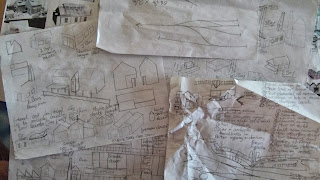 After lots of ideas came and went, I settled on a shunting or switching style layout where its all about setting shunting challenges.  The idea is that full wagons are brought in on the main line and dispersed to all the factories and works on the layout. Empties are brought back to the main line and assembled for dispersal back to where they came from. Also materials have to be moved from one workshop to another in railway vans so this adds another dimension to the layout.

I have four Naval factories on the layout that are part of the Naval Dockyard. I will be using downloadable kits from www.3dk.ca as they are highly detailed, come with lots of extras and I can retro fit them to suit my purpose. Also I want the layout to have a uniform level of detail but not to be bogged down with super detailing everything. The layout has to be finished within a year to a level that I can take it to shows in Ontario where I now live.

Now lets get started on the actual building of the baseboards. My biggest fear in constructing the baseboards was humidity as living in Ontario in Canada we tend to get a lot of it. I was worried about the boards warping so I plumped for a system of box assembly where a 3/4” x 2 1/2” piece of dressed wood was sandwiched in between 1/4” plywood. It is simply glued and pined and forms a strong box. I also fixed in place at every corner right angled cuts of  1/2” MDF

The layout was going to have three sections, one 6 foot middle section and two 2 foot end sections. In hind sight I should have made just two five foot sections but as more scenic sections will be bolted onto the front and rear of the layout, I wanted a single strong center section that everything else was bolted onto.

Once the center box section was built I added a further three cross sections with right angled corner supports. 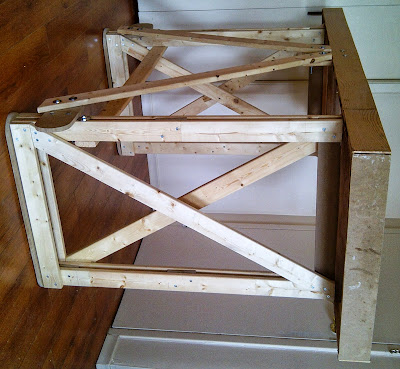 I'm not quite sure why this photo has decided to lie sideways but hopefully by my next post I can figure why it is not behaving.

Well! here ends the end of the beginning and the quote for today is: